Let´s go back 50 years in time. The technique of artificial insemination of farm animals was still in its infancy. Driven by the emerging opportunities and dissatisfied with the existing range of products on the market, Dr. Ludwig Simmet developed a novel technique for deep-freezing bull semen. This innovative technology led to the patent registration of his "Minitüb System" in 1968, which - for the first time in the world - allowed bull semen to be filled fully automatically into plastic tubes. The time was ripe for this pioneering idea: Shortly after a prototype of the filling and sealing machine for Minitubes MT90, its successor for filling and sealing Minitubes MT65 was produced in series and delivered to customers worldwide. The first major contract of that machine was signed with the Danish International Development Agency (Danida) equipping bull stations in India.

In 1970, to organize these activities entrepreneurially, Dr. Ludwig Simmet and his wife Irmingard founded the company "Minitüb Abfülltechnik GmbH" for the development, production and sale of products and technologies for the artificial insemination of farm animals and pets. Since its "birth", Minitube has come of age and seems not to stop growing. 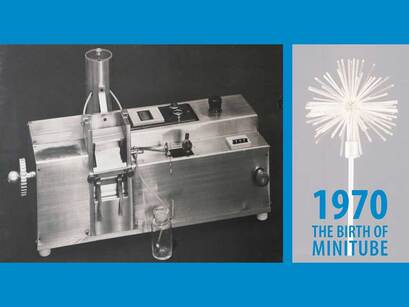