The founding of Minitube in 1970 was closely related to automation of bovine semen processing with a novel straw technology. However, Minitube did not play any less of a role in developing porcine reproduction technology.

Dr. Ludwig Simmet went to Sweden in 1960 and was introduced to the AI techniques then being used in swine. He wrote that he was “…immediately convinced that AI in pigs could offer farmers in Germany tremendous and immediate advantages.” In the same year, he and his wife Irmingard returned to Sweden to learn all they could about AI in swine. Thanks to the foresight of the management at the lower Bavarian farmer's cooperative and to Dr. Simmet’s enthusiasm, one of the first boar studs in Germany was established soon after.

As a pioneer in the field of artificial insemination, Minitube has provided expertise and high quality products to the boar stud and sow farm for five decades.

Care for an example? In 1972, with the Spirette®, Minitube developed the world’s first disposable AI catheter for pig insemination. Another milestones in porcine AI technology development were the world’s first long-term extender for boar semen, Androhep®, in 1988 or the first fully automatic boar semen packaging (BSP) line worldwide only one year later. 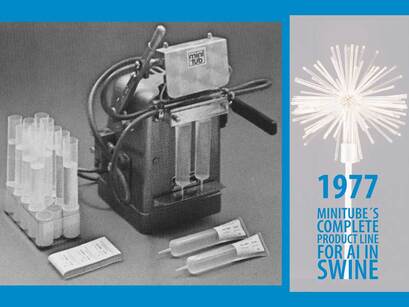